Category: Quotes in the News

Quotes in the News

We’re huge fans of the wonderfully-quotable Tina Fey, queen of American comedy, here at Quotables HQ. From Saturday Night Live, to Mean Girls, to 30 Rock, and not forgetting her infamous Sarah Palin impressions, Tina Fey is a pioneer of smart, side-splitting quips and slyly hilarious zingers, she’s the sexy, funny everywoman who is almost indecently talented. We love her rather a lot.

To celebrate the launch of Tina’s first book – the memoir/essay collection Bossypants, we’ve put together our Top 20 Tina Fey Quotables, including a choice few from her new book. And for all your 30 Rock fans, look out for our Top 20 Liz Lemon quotes next week! Click on each quote to love it on Quotables, or share on Twitter or Facebook – and let us know in the comments if we’ve missed any of your favourites!

1. I never dreamed I would receive the Mark Twain Prize for American Humor, mostly because my style is so typically Austrian.

2.Ladies gotta say no to their husbands at the movies. They gotta say: “No, we are watching back-to-back cancer movies. And then this movie about a cat.”

3. I know older men in comedy who can barely feed and clean themselves, and they still work. The women, though, they’re all ‘crazy.’ I have a suspicion — and hear me out, because this is a rough one — that the definition of ‘crazy’ in show business is a woman who keeps talking even after no one wants to f*ck her anymore.

4. How do you juggle it all?’ people constantly ask me, with an accusatory look in their eyes. ‘You’re screwing it all up, aren’t you?’ their eyes say. My standard answer is that I have the same struggle as any working parent but with the good fortune to be working at my dream job. Or sometimes I just hand them a juicy red apple I’ve poisoned in my working-mother witch cauldron and fly away.

5. Anyone who knows me will tell you that I am all about money. I mean, just look how well my line of zodiac-inspired toe rings and homeopathic children’s medications are selling on Home Shopping Network.

6. [On what to expect from her Oscar dress] I only know that this dress will have to be ‘fancier’ than a Golden Globes dress, but I wouldn’t hold your breath to see me in a four-foot ruffled train with an origami-inspired front. Whatever it is, it will be see-through, because that is my trademark.

7. I had to get back to work. NBC has me under contract. The baby and I only have a verbal agreement.

10. Don’t be too precious or attached to anything you write. Let things be malleable. For sketch writers, remember they’re called sketches for a reason. They’re not called oil paintings. Some of them are going to stink. You have to let them stink. 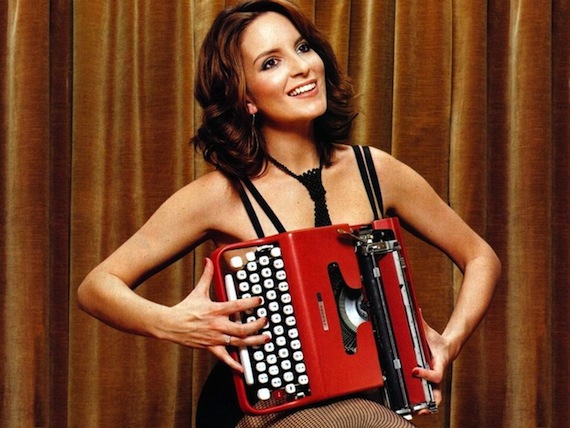 11. Twitter seems like a busman’s holiday: just more writing. I have no plans to do it. I’ll just stick with my 24/7 webcam. I’m old-fashioned that way

12. There are a couple of things I want to impart to ladies who want to be in comedy: One, you don’t have to be weird or be quirky to get your job done. And two, comedy skill is not sexually transmittable. You do not have to sleep with a comedian to learn what you’re doing. Male comedians will not like that advice, but it is the truth.

13. The part of Jack Donaghy was written for Alec Baldwin. Unfortunately, I didn’t have the courage to introduce myself to him and tell him that at the time, so for several months I met with some of the best actors in New York…it just became clearer and clearer that this part was for no-one except Alec Baldwin. And so I knew what I had to do: I got pregnant and I stalled for a year.

14. I really love cursing a lot. But as I get older, I realize it’s a little unseemly for women of a certain age. But then once you pass sixty-five, you can hit it full tilt again and it’s charming. Once you’re Lauren Bacall’s age, you can be like, “What the f*ck.”

15. I’m not a mean person, but I have a capacity for it. I have the biting comment formed somewhere in the back of my head — like it’s in captivity. Sometimes people expect that I’m going to be tough. It’s not a bad situation. People treat you better. People are on time.

16. Amy Poehler and I have been friends for so long, we’re like Oprah and Gale. Only we’re not denying anything.

17. Tina Fey: Maybe what bothers me the most is that people say that Hillary is a bitch. Let me say something about that: Yeah, she is. And so am I and so is this one. (pointing to Amy Poehler)

Amy Poehler: Yeah, deal with it.

18. May she play the Drums to the fiery rhythm of her Own Heart with the sinewy strength of her Own Arms, so she need Not Lie With Drummers. [from ‘A Mother’s Prayer for Her Child’]

19. I regularly ate health food cookies so disgusting that when I enthusiastically gave one to Rachel Dratch, she drew a picture of a rabbit and broke the cookie into a trail of tiny pieces coming out of the rabbit’s butt.

20. I like to crack the jokes now and again, but it’s only because I struggle with math.